The Fashion Designer from Kuwait 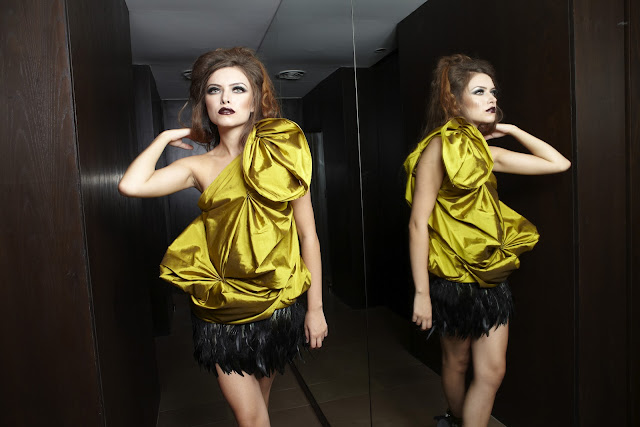 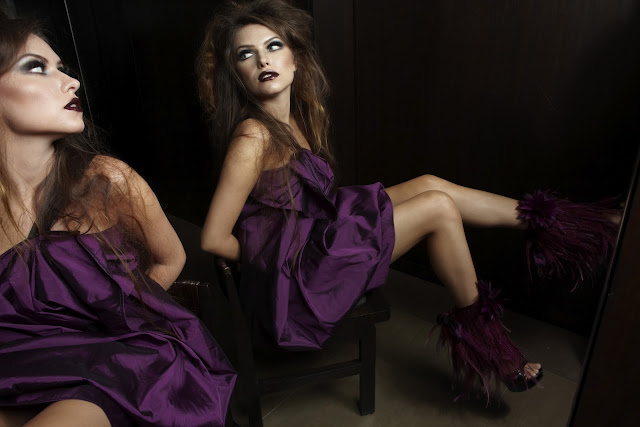 He trained as an architect and then earned a degree in fashion knits. He worked for John Galliano at Christian Dior. His knitwear designs caught the attention of Vogue magazine. He was resident designer at London's Browns store. Today he is back in his native Kuwait where Tahir Sultan has established his base,creating his beautiful designs that have a very particular feel to them. Learn more about this fashion designer from the Middle East here. 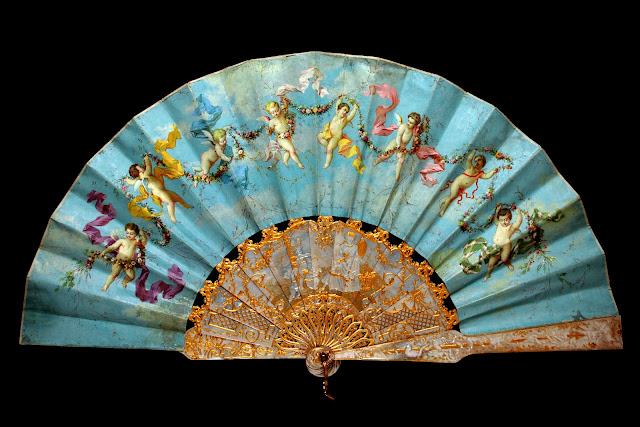 It's not usual for me to include exhibitions so often on the blog but I couldn't let this one pass by. If you're in London or going to be there before February 26, that's next Saturday, you simply must not miss a visit to
The Fan Museum in Greenwich. The museum is hosting an incredible exhibition of gorgeous fans such as these in the exhibition 'Alexandre - Fan Maker to the Courts of Europe'.

Ok so it's not the best season to talk about fans, at least on this side of the hemisphere, but these rare and collectible beauties are an inspiration all year round, no matter the weather. 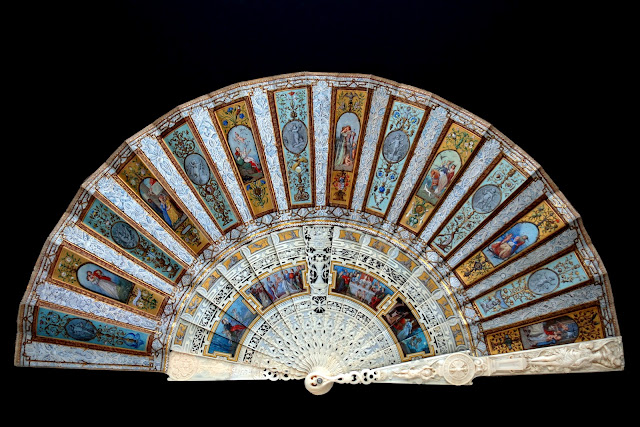 'Alexandre: Fan Maker to the Courts of Europe', shows the work of Félix Alexandre (b.1823) who rose to fame during the 1850’s to become fan maker to Empress Eugènie, the Empress of Russia, the Queen of the
Netherlands and Queen Victoria – a fact proudly proclaimed in gold letters on the inside of his fan boxes. Not to mention the glittering society of Paris and beyond.  Not only did Alexandre paint fan leaves and produce designs for many of the elaborate montures (sticks and guards), but he was also the first éventailliste to employ painters and designers who were part of the coterie of fashionable artists working in France at this time. 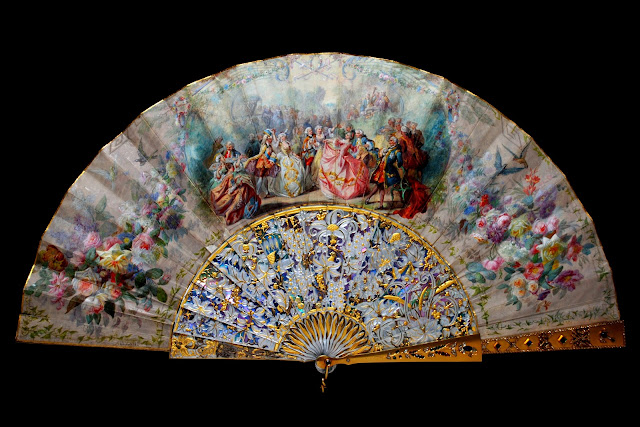 Carousels of figures, putti, flowers; montures of sumptuously carved ivory, tortoiseshell, engraved mother of pearl and lavish gilding: even the most cursory glance at an Alexandre fan will reveal an era of enormous
affluence where emperors and royalty were the celebrities of the day.  Most ‘high society’ women coveted an Alexandre fan and these beautiful objects will be displayed with an elegant ball-gown (once worn by a
princess) and other accessories of the period which covers the second half of the nineteenth century.


This ambitious exhibition, a joint initiative of The Fan Museum and Musée Galliera (Musée de la Mode et du costume de la Ville de Paris), brings together, for the first time, an array of exquisite Alexandre fans
including loans from Royal Collections and some of Europe’s most prestigious collectors. Drawing on  extensive archival research, the exhibition offers unparalleled insights into the craft of a particularly
enigmatic éventailliste, undoubtedly one of the major forces in 19th century French fan design and production.

Email ThisBlogThis!Share to TwitterShare to FacebookShare to Pinterest
Labels: fans. The Fan Museum, London, Where on Art?; exhibition

Over the years I have learnt that some shoes make me pay an extra price for wearing them. That price translates into painful toes, painful back, painful legs, burning strap marks. Some shoes I could have sworn were comfortable, let me down badly when I took them along on trips abroad. Walking short distances at home was totally different from walking longer distances when out all day touring a city somewhere abroad. I've had beautiful red leather shoes that didn't enjoy the rain in Paris and became a shameful pair of miserable sodden dismalities that had to be thrown away. I've also had beautiful black leather boots, very expensive ones at that, that riddled my feet with pain after walking round Paris (yes it was twice in Paris) and I ended up with toes that spelt trouble for many months after that one episode. Both experiences taught me to always take two pairs of shoes in my luggage when travelling abroad.

So..... I've become extra wary about what I buy. I look at the heel, its height, its structure. I try on, walk around, test the feeling, check to see if my foot is cramped, if the shoe is loose fitting.... if it is comfortable all round. I don't sacrifice my feet's happiness and bliss in favour of fashion but.... I want my shoes to be fashionable, lovely and made well.


Meaning, that when I scout around looking for good shoes, I shy away from 'Made in China' plastic simulant leather that spells trouble. And I realise, more often than not, that good shoes, comfortable shoes, real leather shoes that are constructed well, are not that easy to find. When I do find them, some heels are way too high, some are way too flat, some are way too narrow and I suppose I am rather fickle about it all.


Another issue about new shoes is how to care for them. Do you notice that you buy even one simple cotton vest and it has washing and care directions attached to it? What about shoes? They rarely have any care and cleaning directions attached do they? We are supposed to know how to clean leather, suede, fabric, plastic or whatever else the shoe is made of, whatever its colour, whatever its finish. When two or three different materials are used in combination, the cleaning solution is usually fraught with risks of destruction. This is especially true of trainers - some people will throw them in the washing machine, others will just sponge them clean, and the less adventurous ones will just let them be until they become so filthy they only deserve to  be thrown out. Is there a safe way out?


I hope that somewhere out there, shoe manufacturers read this blog and so, I invite you, reader, to write back, send in a comment and tell them what you think about this shoe dilemma business.....

Email ThisBlogThis!Share to TwitterShare to FacebookShare to Pinterest
Labels: shoes

Where on Art...? The Snake in Jewellery 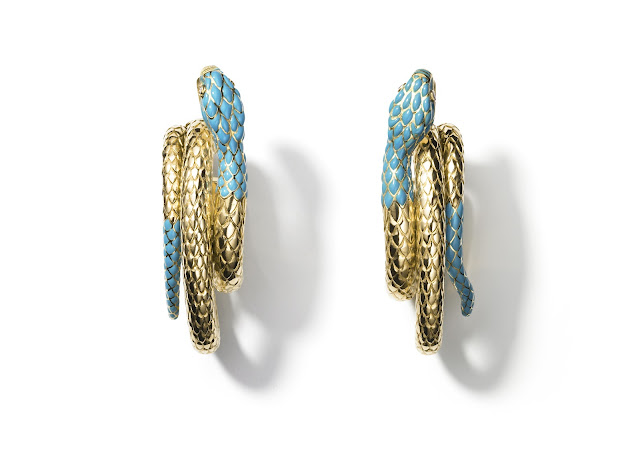 If you haven't visited it yet, you have just a few days left before this exhibition packs up. "Serpentina - The Snake in Jewellery Around the World' stretches to February 26 at Pforzheim’s Jewellery Museum in Germany and it is all about snake jewellery.

The symbolic meanings of the snake are quite varied and exist in all cultures. The snake has inspired the creation of exquisite works of art and jewellery. This exhibition includes 120 remarkable pieces of snake jewellery from varied periods and countries - and it's all about snakes.  Curated by Fritz Falk, the museum’s director for over 30 years, this is the first time ever that the theme of the snake in jewellery has been dealt with so extensively.

The snake is found in jewellery from several ancient civilisations - Ancient Egypt, Minoic civilization of Crete, Ancient Greece and Rome. North of the Alps, the snake adorned Celtic jewellery, enhanced the Franks’ and Alemanni’s golden disk fibulas in the Migration Period, and the Vikings decorated bangles and metal fittings with snake motifs.

The snake’s comeback in the 19th century and especially in the Art Nouveau Period was all the more striking. Snake jewellery were  created by such greats as Lalique and Fouquet in Paris,  by members of the Arts & Crafts movement in England and by the jewellery industry in Pforzheim.

Jewellery artists and manufacturers of the 20th and early 21st centuries have interpreted the snake motif in a wide variety of original fashions, creating such diverse pieces as Mario Pinton’s delicate snake bangle, Günter Krauss’s mighty necklace or the diamond-studded necklaces and bangles designed by Cartier, Boucheron and the Hemmerle Jewellers in Munich.

Outside Europe, snake motifs adorned golden and sometimes gem-set pectorals (breast jewellery) in pre-Columbian Middle America. In India and Indonesia snake jewellery in the shape of amulets, bangles and earrings is still popular today. Other impressive examples are the golden creations of the Akan in Ghana and Nigeria.

Even in Japan the snake was used to adorn  netsukes. Because traditional Japanese garments had no pockets, a netsuke was used to fasten a small container for personal belongings such as an inrō, an elaborately crafted box, to the sash.

Whether good or bad – the snake is a creature which has occupied the minds of people since time immemorial and in many different ways.
'Serpentina –Snake Jewellery from around the World'  which contains 200 colour illustrations, and is in the English and German languages. 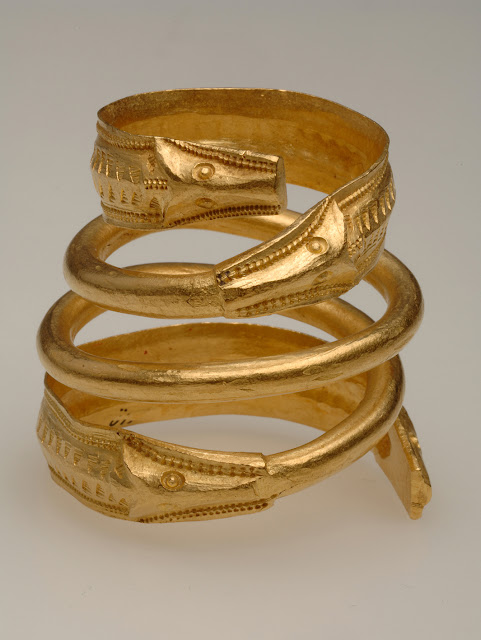 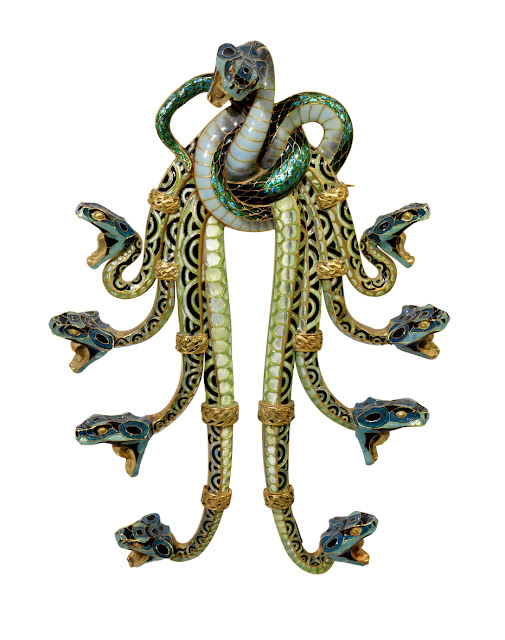 Email ThisBlogThis!Share to TwitterShare to FacebookShare to Pinterest
Labels: Serpentina, snake jewellery, Where on Art?; exhibition

The Colours of Malta 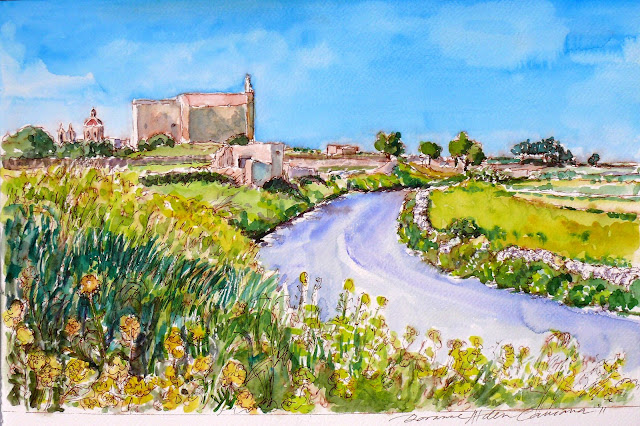 The Way to Girgenti


After having shown you some photographic images of Malta here, I am today showing you an artist's impression of Malta and its marvellously warm and brilliant colours. These paintings are by the Maltese artist Doranne Alden Caruana. 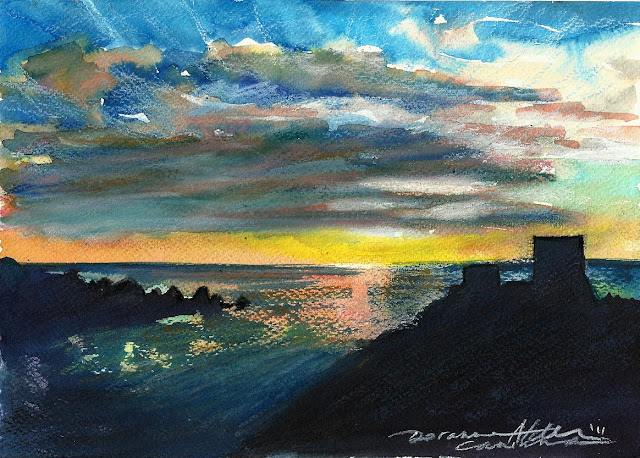 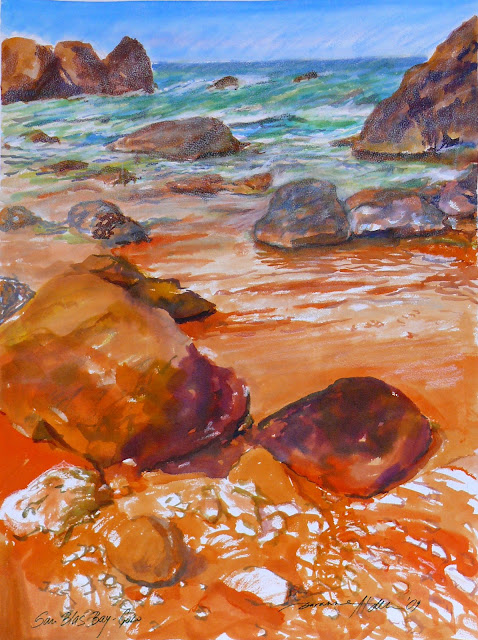 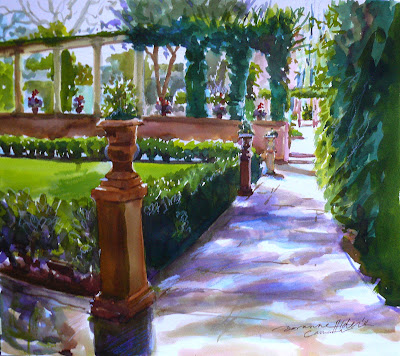 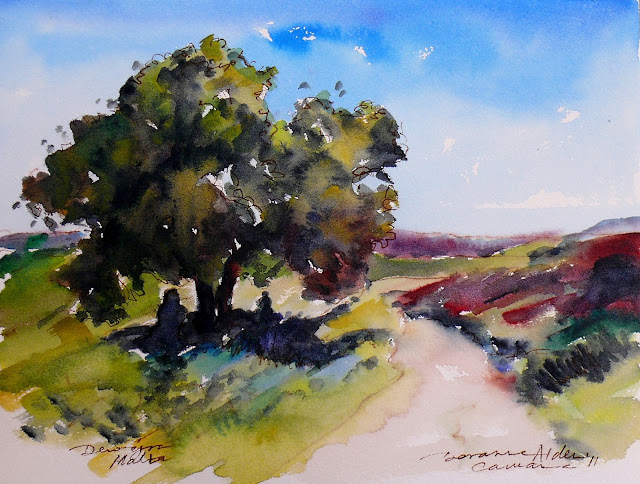 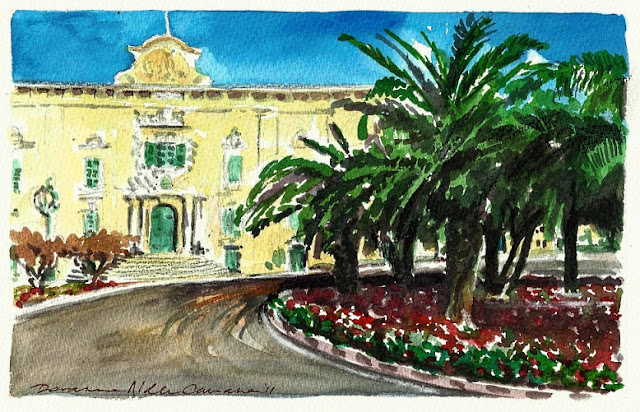 Castillia
Posted by FairyFiligree No comments: Links to this post 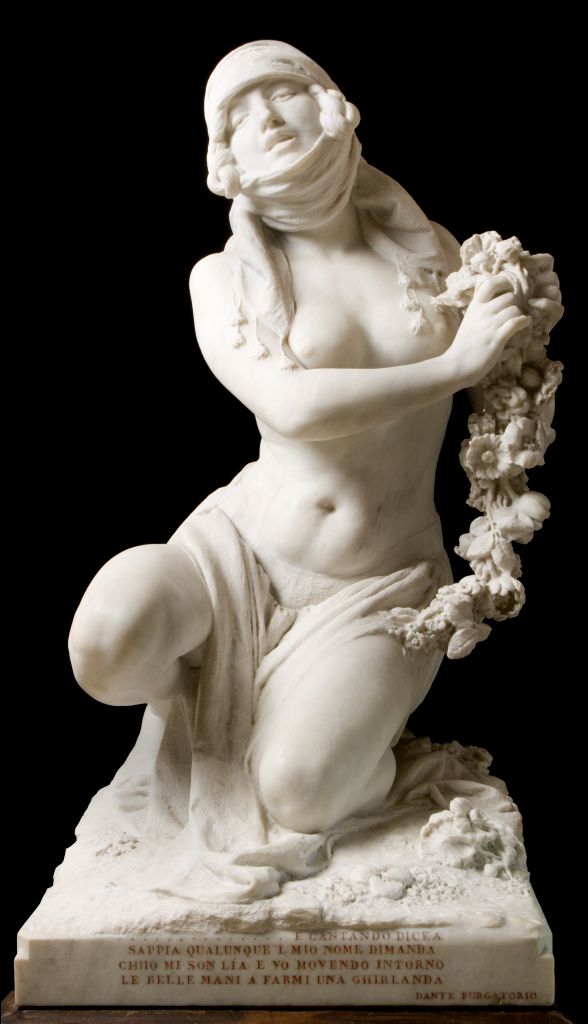 Malta's  National Museum of Fine Arts, situated in Malta's capital city of Valletta, contains an eclectic mix of artefacts which reflect the islands' own colourful history. Apart from works of art by leading Maltese and Gozitan artists, the museum collection includes several works by renown artists from varied different countries.

This sculpture is one of the most poignantly beautiful ones, at least to my own eyes. It is entitled 'Leah' and was made by the Italian sculptor Eugenio Maccagnani (1852-1930). The sculpture was brought to Malta from Rome in the early 1930s, by an avid art collector of Swedish descent -  Capt Olof Frederick Gollcher OBE (1889-1962) (whose last home in the old capital of Mdina, is today a very important house museum in its own right).

The writing on the pedestal beneath the figure, is a quotation from Dante's 'Purgatorio', the second part of his 'La Divinia Commedia'. It refers to Leah, who, according to the Bible, was the first of the two wives of the Hebrew patriarch Jacob and the mother of six sons whose descendants became the Twelve Tribes of Israel.

"... in my dream, I seemed to see a woman
both young and fair; along a plain she gathered
flowers, and even as she sang, she said:
Whoever asks my name, know that I'm Leah,
and I apply my lovely hands to fashion
a garland of the flowers I have gathered."

Posted by FairyFiligree No comments: Links to this post Created from a Vintage Card dating back to the 1920s Vintage card from the 1960s Re-created from a Vintage Card dating back to 1930s Vintage Card from the 1940s