After a summer spent doing other things elsewhere, Fairyfiligree once again welcomes you all to autumn, a new season and some more blogging about all things vintage and nice, some fantastic art and awesome jewels.

As the islands keep seeing temperatures spike up to beach-going temperatures round about mid-day and early afternoon, evenings and early mornings start becoming slightly fresher as a way of making autumn's approach felt. So all Maltese women think of solutions to cover up shoulders whilst allowing an easy uncovering as the sun starts warming up the day. A quick solution - the bolero. What's that? 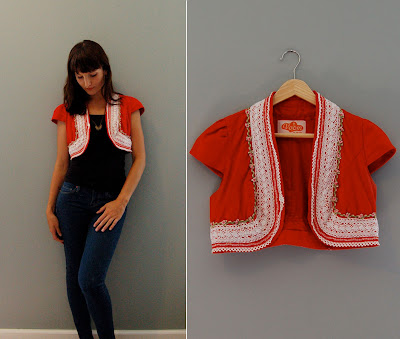 The Bolero was an item of clothing which became very popular during the 1950s. It was not used just during the 1950s and not just to complement 1950s dresses. The bolero was also a popular garment during Victorian and Edwardian times. The

name derives from the very old and traditional Spanish dance Bolero and the jacket was typically worn by Bolero dancers during their performance.

Today we all call it simply a Shrug.