It's amazing what pops up during estate thrifting. I unearthed this lovely all silk scarf, signed and with a label saying Jacques Fath Paris. It wasn't exactly my colour, but it seemed too handsome to let pass & I love silk so picked it up anyway.
Then I researched some and found out this Mr Fath was an incredibly important
French designer who was somehow forgotten.

I found this information on the web......

Check out my Fath scarf and see what you think: 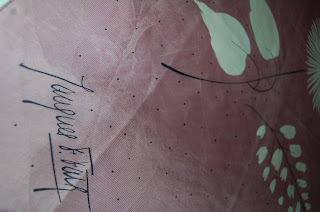 For more images of my Fath scarf check out...

Here is a Fath hat which is found at the Victoria & Albert Museum in London: And here is a dress to die for... the kind of frothy vintage beauty Dita von Teese would dream of wearing for her next promo....

After reading the history, that scarf is an awesome find!

You are so interesting! I don't think I've read through a single thing like that before.

I also have an amazing find - a pure wool Jacques Fath dress - lining stamped with the name and the original label in the back. Picked up at a jumble sale some years ago and valued at Sotheby's!!! But love it too much to part with it (even though at moment cant fit in it - did wear it when a little younger and slimmer). Would really like to know more about its provenance but without being able to locate his old books unlikely to.