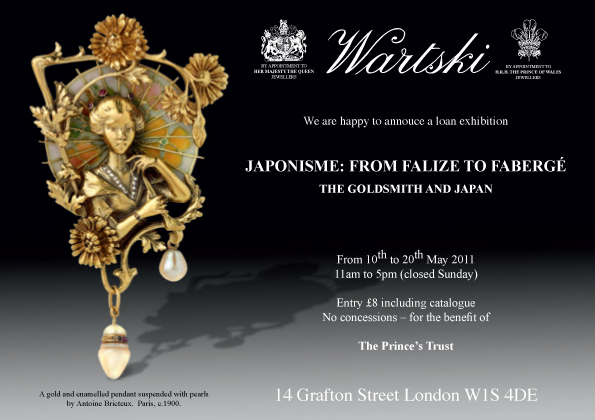 You may have heard of Wartski quite recently as this was where Prince William got the wedding ring for Kate Middleton.

If you're curious about visiting this exclusive London jeweller, you have all the more reason to do so now since you can also view a very special exhibition dedicated to jewellery:
﻿
Japonisme: From Falize to Fabergé,

the Goldsmith and Japan.

This is a loan exhibition which carries approximately 200 items on show. Wartski decided to do the exhibition, as it was an area of design in jewellery that had not been explored hugely. Whilst there had been exhibitions on Japonisme in art more generally (and also on aetheticism), no exhibition had explored the influence of Japonisme on jewellery.


This exhibition, spanning the fifty years from 1867 to 1917, is in fact the first devoted to the influence of Japanese works of art on Western jewellers and goldsmiths including Falize, Boucheron, Fouquet, Gaillard, Vever, Lalique, Cartier, Tiffany, Gorham, Elkington, Wolfers, and Fabergé.

Some 160 jewels, objects and original designs assembled from public and private collections will be shown alongside photographs of related Japanese source material. Amongst the loans are a centrepiece by Boucheron featuring a Japanese boy painting a screen, a diamond-set corsage ornament by Vever composed of a spray of cherry blossom measuring 29 cm, a winter landscape pendant by Lalique framed by ice-laden conifers, a brooch in the form of a chrysanthemum set with Mississippi pearls by Tiffany, and a hardstone Japanese flower study poised on a miniature table by Fabergé.

Hi my dear-sounds like an awesome exhibition, thanks so much for sharing! Your etsy treasury is lovely too! xx

Thank you for the info. I will pop along and take a look. Xxxx

In answer to your question. Yep she was actually walking in them. Cool eh. Xxxx

thanks for sharing this info.